The “Spirit of Kwikwetlem” house post is set to be raised on June 21, 2022, along the Shoreline Trail with two other house posts commissioned by the Port Moody Ecological Society.
By: Janis Cleugh, Tri City News, June 1, 2022 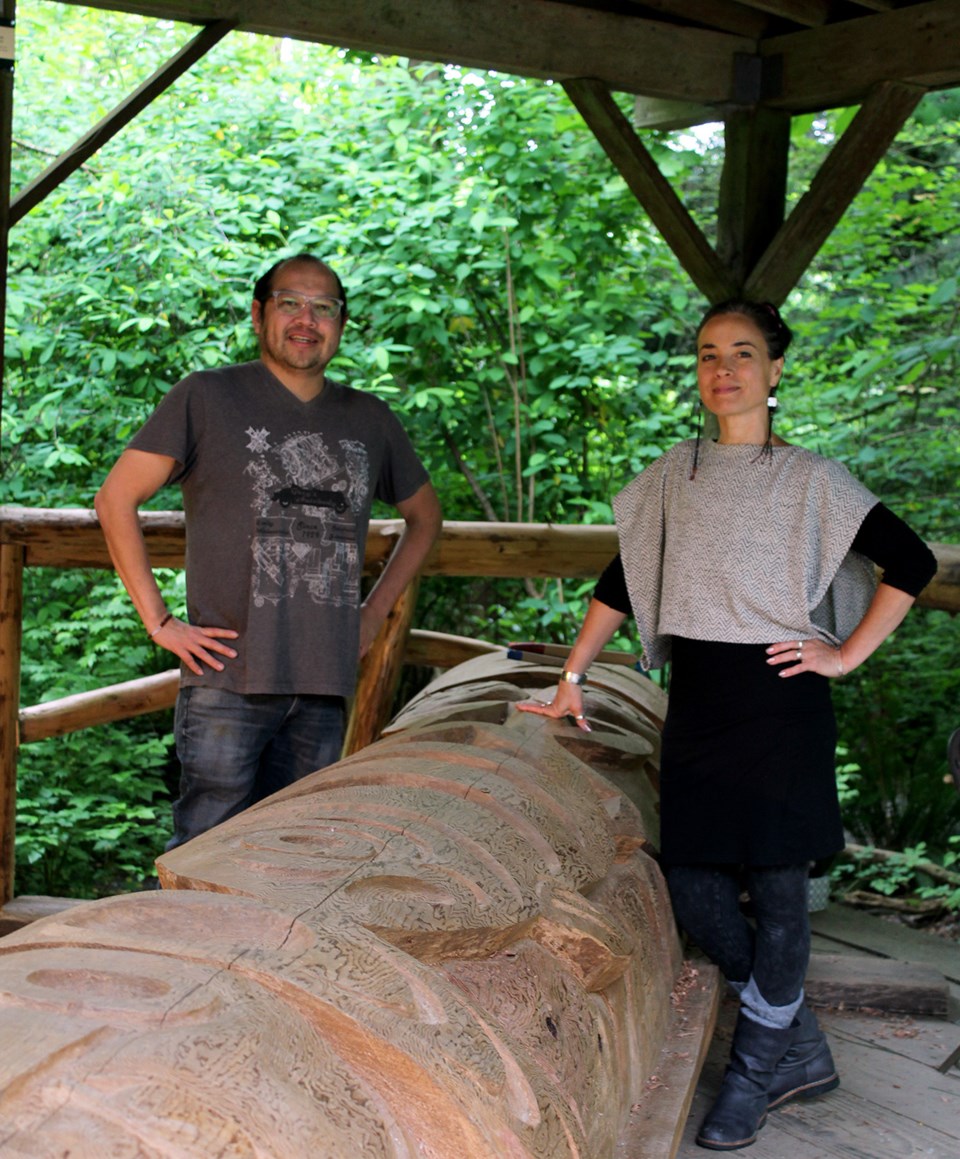 Carver Brandon Gabriel with Tasha Faye Evans and the “Spirit of Kwikwetlem” house post, at Noons Creek hatchery in Port Moody.JANIS CLEUGH/THE TRI-CITY NEWS
Spirit of Kwikwetlem’ house post nearly ready for Port Moody’ article by Janis Cleugh of The Tri-City News. Special thanks and appreciation also to Tasha Faye Evans, project manager, teacher and community builder.
The “Spirit of Kwikwetlem” house post is set to be raised on June 21, 2022, along the Shoreline Trail with two other house posts commissioned by the Port Moody Ecological Society.
Carver Brandon Gabriel with Tasha Faye Evans and the “Spirit of Kwikwetlem” house post, at Noons Creek hatchery in Port Moody.JANIS CLEUGH/THE TRI-CITY NEWS
Brandon Gabriel smoothes his hand over the shapes on the house post.
He’s putting the finishing touches on the Spirit of Kwikwetlem, a public art piece that he’s worked on — with Dené/Cree artist Jonas Bige — for the past two years, at the Noons Creek hatchery in Port Moody.
Gabriel was commissioned by Port Moody resident Tasha Faye Evans, on behalf of the Port Moody Ecological Society, to carve the Kwikwetlem house post — one of five set to be raised as part of the Welcome Post Project that acknowledges the five First Nations that once cared for the area.
Gabriel, a member of the Kwantlen First Nation who has familial ties to Kwikwetlem, said there’s been a lot of interest in the Spirit of Kwikwetlem.
“Many local residents who walk through this park take ownership of the house post,” he tells Tri-City News. “They stop and watch our work. There’s a lot of excitement building up about when it will be raised.”
Designed in collaboration with Kwikwetlem elders and youth, his house post tells the story of the Kwikwetlem fish and how they became trapped when the Coquitlam dam was built in 1914; the BC Hydro dam wiped out the Kwikwetlem winter village and resulted in generations of trauma, Evans said.
Still, those “little red fish up the river” (translated as “Kwikwetlem” in the dialect hən̓q̓əmin̓əm̓) managed to survive for decades despite being landlocked — a testament to the spirit of the Nation, Evans said.
Ironically, the 600-year-old cedar tree that had already fallen near the Coquitlam Lake and was extracted for the Welcome Post Project is also being used, in part, for another Kwikwetlem house post that Gabriel was commissioned to carve for the Kwikwetlem First Nation; that house post will be raised next month to mark the opening of the Red Fish Healing Centre for Mental Health & Addiction, at the səmiq̓wəʔelə/Riverview Lands in Coquitlam.
Gabriel told Tri-City News that although he hails from the Kwantlen Nation, there are linguistic and cultural similarities with the Kwikwetlem; the two Nations also share the same Coast Salish art style, which uses design elements like ovals (or circles), trigons and crescents.
Evans hopes to see the Spirit of Kwikwetlem raised next year on National Indigenous Peoples Day, June 21, 2022, at the mouth of the Shoreline Trail at Rocky Point Park in Port Moody, along with two more house posts in the “In the Presence of Ancestors” collection.
Tsleil Waututh artist Zachary George is now carving Grandmother’s Prayer — a house post in honour of his Nation that will be raised near the Boathouse restaurant — while Chrystal Sparrow is the current artist-in-residence and is searching for a tree for her Musqueam house post that will go up around Old Orchard Park.
To complete the Shoreline Trail circle, Xwalacktun OBC from the Squamish Nation will carve two house posts to recognize his Nation, beginning this fall; that gateway will be placed close to the old mill site along the trail. Finally, Evans hopes to commission an Indigenous artist for the Katzie house post.
All five house posts are set to go up by June 21, 2023.
By raising the five posts along the Shoreline Trail, “we reassert this land for the original caretakers and leave a legacy for future generations,” Evans said.
HEAR THEM SPEAK
Meanwhile, to coincide with the carving of each house post, Evans has programmed a series of workshops for the public to learn more about the five Indigenous cultures.
To register for a workshop or to donate to the Welcome Post Project, visit www.noonscreek.org.

Acknowledging that we are on the unceded, occupied, ancestral and traditional lands of the Səl̓ílwətaʔ/Selilwitulh (Tsleil-Waututh), Kʷikʷəƛ̓əm (Kwikwetlem), xʷməθkwəy̓əm (Musqueam), Skwxwú7mesh (Squamish), and Stó:lō Nations.

Proudly presented by the Port Moody Ecological Society / Noons Creek Hatchery, Vines Festival, City of Port Moody, and the Canada Arts Council. Supported by the Canada Council for the Arts.